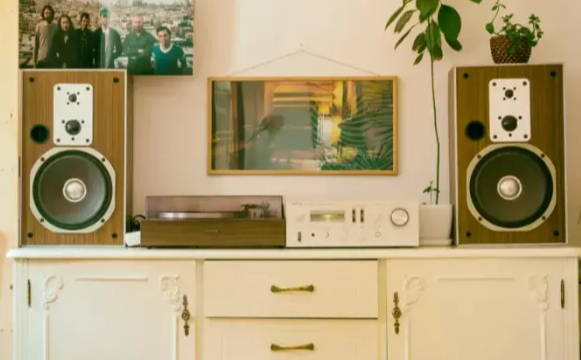 Have you ever invested in a brand new device or piece of audio equipment, having deliberated for ages about the cost, then finally bitten the bullet. Only to find that within a year, something much more advanced has come along.

And in just a couple of years, your model has become completely outdated. Redundant, even.

It’s all too common with home entertainment & audio equipment as technology continues to advance at such a phenomenal pace.

But what do you do with the tech you have already invested in?

Unless you have the means, or desire, to replace everything you own every couple of years - the chances are you still have some awesome tech that works brilliantly. You just don’t use it as much…. if at all.

Don’t worry, you are far from alone. And you’ve got some great solutions coming!

Here are 5 ways to upgrade some of your existing tech, quickly and cheaply so that you can bring it back to life and into the convenient wireless world. 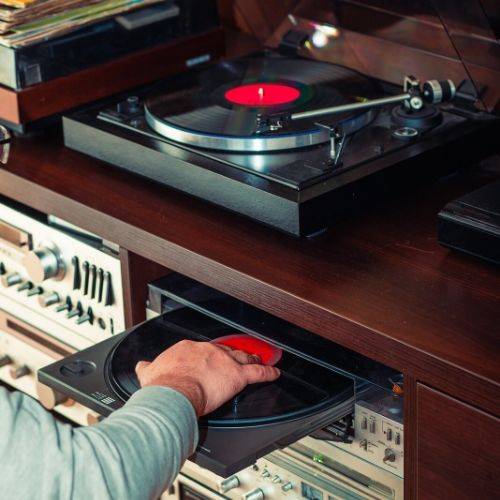 Unlike a smartphone, your home audio equipment shouldn’t have to be replaced every year or two. Particularly when you consider the price and the quality of these stereos, that were designed to last years. Even decades.

The issue of course, is that if you have a stereo, Hifi or dock that you bought several years ago, it would have fallen behind the times. Especially if it doesn’t have wireless connectivity. There’s a good chance that it’s been hidden away in the attic or left collecting dust on the shelf, as it’s too good to throw out but not modern enough to use today.

Since our phones have been overtaken with a proliferation of wireless streaming apps and the convenience of wireless music, anything wired no longer cuts it. Until now….

But this doesn't need to be the case.

Did you realise, that you can turn make your stereo or dock wireless by adding Bluetooth?

And it isn't as complicated as it might sound. In fact, it's very quick and easy and requires zero technical expertise! 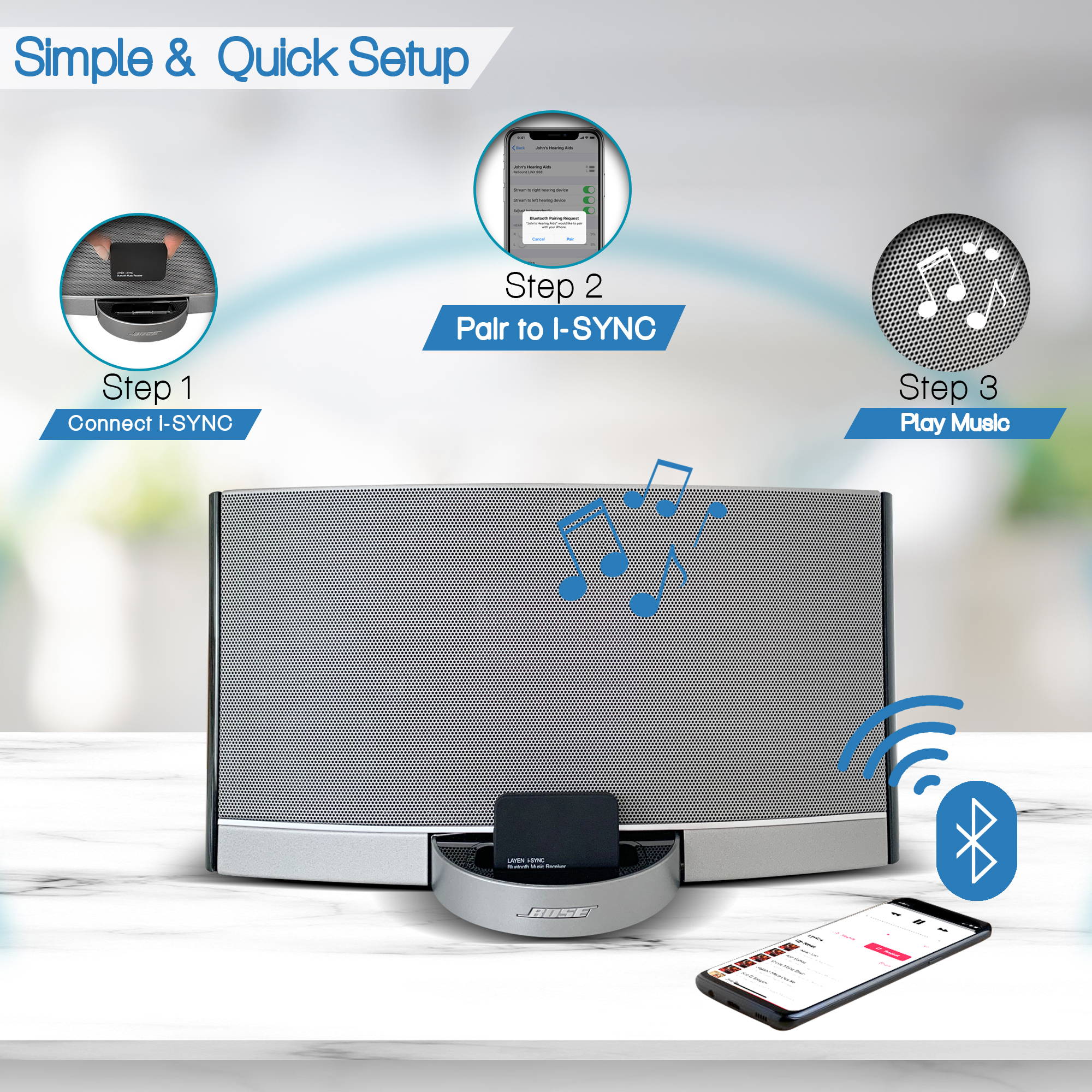 All you need is a Bluetooth Music Receiver.

Connecting this to your docking station, Hifi, stereo or speaker will add Bluetooth capability and allow wireless music streaming between your phone and the speaker.

Bluetooth is great as it’s readily available on almost any smartphone, laptop and tablet - you can pretty much use it anywhere, and can stream music from any of your devices to your upgraded (and now-wireless) speaker.

This can save you hundreds of pounds AND give a new lease of life to a perfectly good bit of tech that always had amazing sound and was not ready for the stereo graveyard.

Bluetooth music receivers are quick and easy to use. Simply connect it to your stereo or docking station, pair to your phone and play your music. There are 2 types of receivers you can get - 30 pin receivers for docking stations for the older iPhones & iPods and AUX receivers that will connect to the 3.5mm AUX-in / headphone jack (ideal for Hifi's, CD Players and sound systems).

And if one upgrade wasn't enough, you can take it one step further and pair it with Alexa (through your Echo speaker) for a voice activated, wireless dock!

If you want to know what you’d need for your specific stereo or speaker - check out our Buying Guide for Home Stereos. 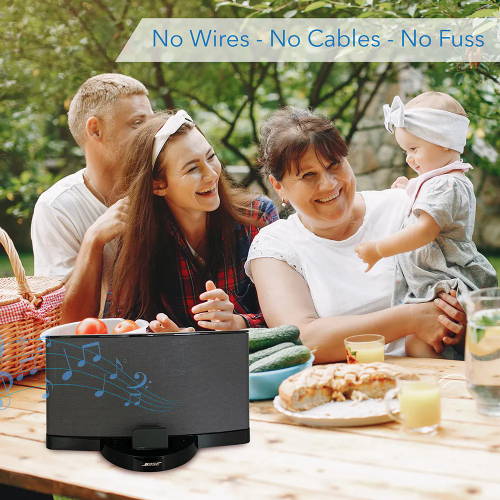 Do you have a favourite pair of wired headphones that you invested heavily in, but can no longer use with your smartphone? Perhaps you have several sets of iPhone headphones lying around as spares but you can’t really use them (which is annoying as the quality is great - and much better than a cheap set!).

If so, this is another hack you might like. As well as using a Bluetooth receiver to turn your stereo Bluetooth you can also use one to make your headphones wireless. 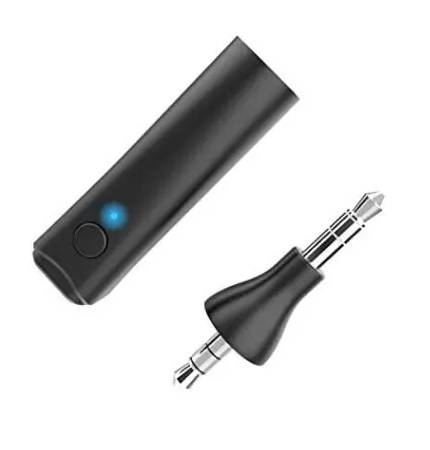 Whilst there are different types of Bluetooth receivers with different connections, to make your headphones wireless you would need an AUX Bluetooth Receiver. This is a receiver that has a 3.5mm AUX connection that the headphone cable can plug into.

As with the stereos, this is a straightforward process. Simply plug the headphone cable into the Bluetooth receiver, pair with your smartphone, tablet or laptop and start streaming your music. The process will take around a minute. 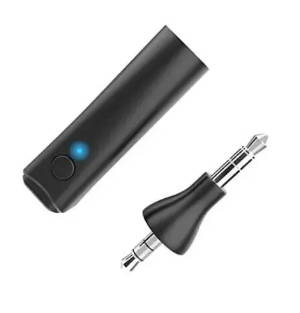 Save your headphones and save yourself the unnecessary cost of investing in a brand new set of decent, wireless headphones. You don’t need to compromise on sound quality, or your wallet!

To find the perfect receiver for your wired headphones - check out our Buying Guide for Wired Headphones. 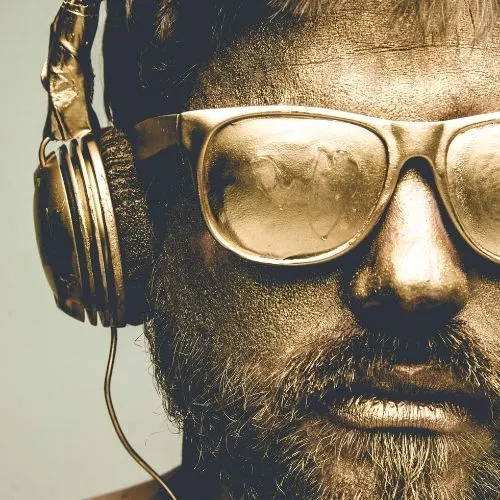 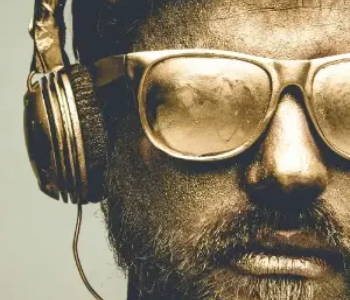 3. Turn Your TV Bluetooth & Watch On Your Bluetooth Headphones

Televisions are not something we tend to throw out as soon as new models are released. They are not cheap and so we usually hang onto them for quite a few years!

We also tend to have more than one in a household and when we do upgrade, the old TV will be moved into another room. Perhaps the bedroom, kitchen, playroom, one of the kids rooms or even the office.

We don’t like to waste our tech so we’ll always find a use for it. Which is great!

But maybe not so great when all the televisions in the house are blaring out at once. Or when you have a partner as a night owl, who likes to watch TV in bed - but you work shifts and need to have your sleep. Or when you want to watch the game in peace, but can still hear the kids tearing around.

These are the times you wish your old television had Bluetooth so that they can be watched in peace. 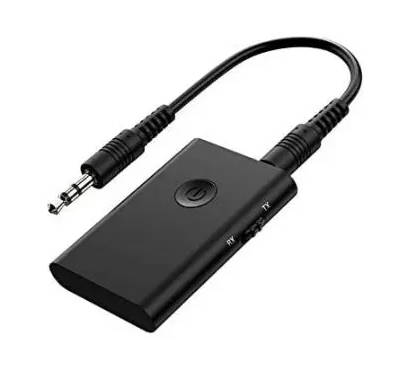 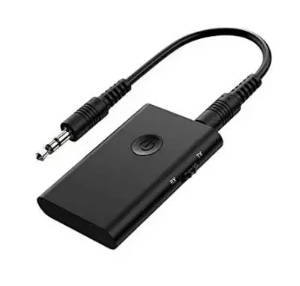 For televisions without Bluetooth already built-in, you need a Bluetooth Transmitter.

This will send the audio wirelessly to your Bluetooth headphones or speaker so that you can enjoy an enhanced audio experience.

In fact a Bluetooth transmitter can usually send audio to two sets of headphones at once.

Again, the process is usually quick and straightforward. You simply connect the Bluetooth Transmitter to your television, hold down the pairing button and pair to the desired Bluetooth device (headphones or speaker).

Once connected the audio will start to be streamed. The entire process will just take a minute or two and anyone can do it :)

This is an ideal solution if you don’t want a complicated setup, you don’t have any technical expertise, you already have expensive equipment that you don’t want to waste and you want to avoid hours of installation time and troubleshooting.

To find the perfect Bluetooth Transmitter for your non-smart television - check out our Buying Guide for Non Smart TV.

Buying Guide: How To Turn Your TV Bluetooth 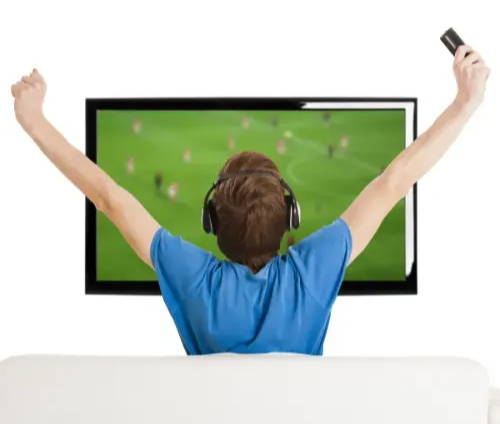 Remember the way we used to have to store music? Before the abundance of wireless streaming apps came into our lives and onto our phones, we could lose hours creating playlists on our iPods. And some of these were pretty awesome!

But then we were introduced to the likes of Spotify and our phones became our music players. Our iPods soon became a distant memory as we started new music collections through our favourite music apps.

If you ever fancy listening to your old playlists and firing up your old iPod, why not upgrade it at the same time and make it wireless so that you can stream your favourite tunes through your Bluetooth speakers or headphones? 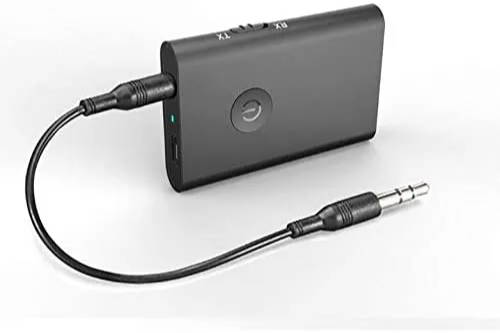 As with the television, you will need a Bluetooth Transmitter to give your iPod Bluetooth capability and allow it to stream music wirelessly.

Use with a pair of Bluetooth headphones or stream to a Bluetooth Speaker and away you go!

Our Bluetooth Transmitter & Receiver will work perfectly with your iPod and will also work with stereos, televisions and headphones.

Again, the process is quick and straightforward. You simply connect the Bluetooth Transmitter to your television, hold down the pairing button and pair to the desired Bluetooth device (headphones or speaker). 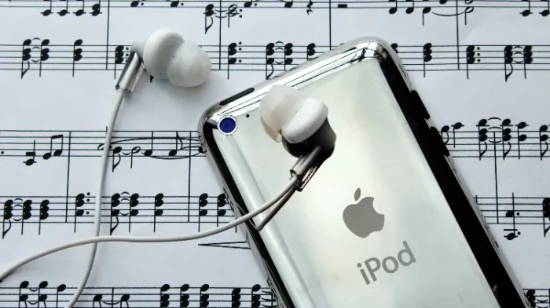 OK, so this one might not strictly come into the home audio category, but we thought it was too good not to mention!

All new cars these days have built-in Bluetooth, but if you or one of your family members still has an older car, a truck or perhaps a work vehicle - that doesn’t have Bluetooth it’s bound to get frustrating!

If you (or they) are fed up with the restrictions of radio and an old CD collection and are ready to blast out your favourite tunes, through your favourite apps whilst on the road - this is what you need. 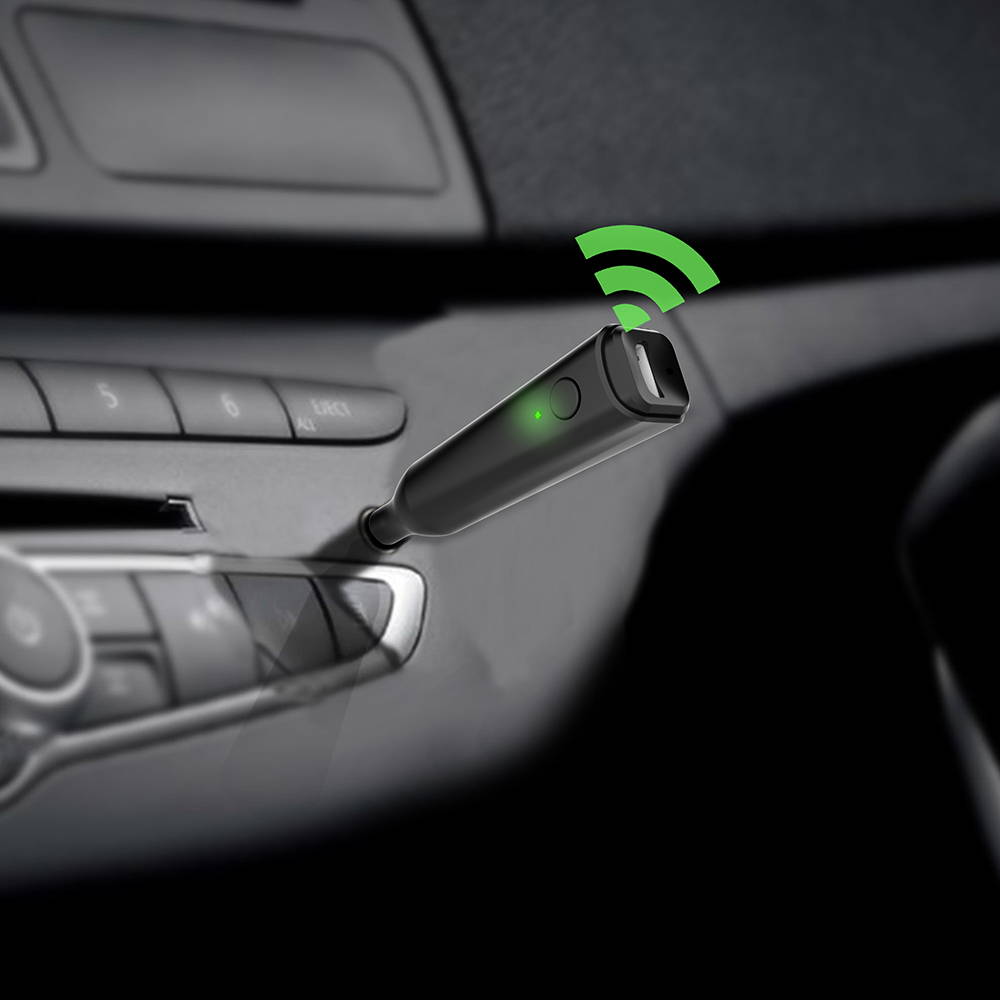 You need a Bluetooth Receiver to turn your car stereo Bluetooth and avoid the unnecessary cost of investing in a brand new one.

Not only will the right Bluetooth Receiver allow you to stream music wirelessly from your smartphone, but it will also let you take handsfree calls on the go! Just make sure the receiver has a built-in microphone.

30 Pin receivers that are used for older generation iPod docks tend to be incompatible with car stereos, which is why we always recommend an AUX Bluetooth receiver to connect to the car’s audio system.

Note this will only work for cars that have a built-in AUX connection (headphone jack) for their audio system. If your car does not have one, then you will need an FM Transmitter instead. This will send the audio to your car stereo via FM radio. This will connect to the phone as soon as you turn the car on, but the handsfree audio quality doesn’t tend to be as good as that produced by the AUX receivers.

As usual, the process is straightforward and quick. Simply connect the receiver to the AUX connection, pair to your phone and play your music. AUX receivers come with rechargeable batteries but can be charged (via micro USB) whilst in use so you don’t need to worry about running out of power.

To find the perfect receiver for your car stereo - check out our Buying Guide for Car Stereos.

Buying Guide: How To Turn Your Car Stereo Bluetooth 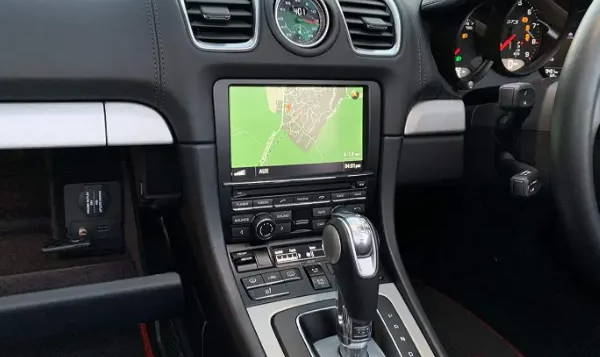 Upgrading your home audio doesn’t need to be expensive.

Equally you don’t have to put up with outdated tech. Adding Bluetooth to all of these audio devices will bring them up to date and into the wireless world, enhancing your audio experience and bringing convenience back to the table.

It's hard to believe that transforming outdated and redundant equipment into convenient, modern wireless systems could be as simple as using a small Bluetooth adapter. Something so small and versatile, that costs a fraction of the price of investing in brand new equipment.

AUX Bluetooth Receivers are the most versatile - as they can be used with home stereos, car stereos and headphones. You can easily switch use between devices.

If you want any more information, please check out the following guides:

Need more help? Get in Touch..

Choosing the right Bluetooth adapter can sometimes seem confusing. Make sure you check out our buying guides (above) which should cover any questions that you might have. We are, of course, on hand to help - so if you want to get in touch just send us a message via the contact form :)

Received my i-sync...plugged into my series 2 Bose i-dock and within minutes it was successfully paired with by Samsung tablet, Android phone, laptop and pc.......a most excellent gizzmo indeed.. .:)

Buying Guide: How to Turn Your Stereo Bluetooth

Buying Guide: How to Turn Your TV Bluetooth